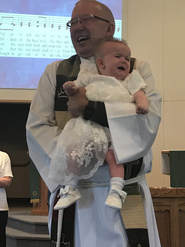 Daryl Thul is a pastor and military chaplain who came to us on January 1, 2018 after spending the better part of the last decade as pastor in Southwestern Minnesota. He is also the Minnesota Army National Guard Chaplain for the 34th Expeditionary Combat Aviation Brigade headquartered in St. Paul.

"Our mission as followers of Jesus is not to run around the world being Theological Policemen - but rather sharing this incredible gift that we have been given," Daryl says. "It's messy work and hard to do - but God for some reason chose us to assist in Building the Kingdom Come - the Kingdom that Jesus ushered in with his death and resurrection."

Born and raised in Cold Spring, MN (not too far away from Becker and SSLC), Daryl is married to Pastor Jennifer Thul of Resurrection Lutheran in St. Joseph. They have four children: Hannalora (Sam), Andreas (Natasha), Oliver and Caleb. They also have five young grandchildren: Liam, Quinn and Rowan, Warren, and Laila.

Thul will be deploying with his Minnesota Army National Guard unit in the near future..

Pastor LaMoore's first day at SSLC included several visits, a lunch pizza party and an introduction to the carpeting crew.